Part One: The Curse

Recently, a thought struck me: what if modern art is just merely about the money? Undoubtedly pessimistic, I realize. Nonetheless, the works of contemporary artists don’t seem particularly amusing in terms of sophistication. Art galleries are and will always be a business; they abide by the critical concept of “if the product doesn’t sell, it won’t be made.” After a more extended analysis, I’ve concluded that the curse of modern art is not that meaningless, yet famous artists can create reputable paintings. It’s that reputable artists can come up with meaningless, yet famous paintings.

For many centuries, artists in affluent Western society produced work that inspired, uplifted, and deepened the human race through their astounding beauty. They did this by demanding of themselves the improvement of their work, continuing to aspire to the highest quality attainable, and overall working with the highest standards of excellence possible. However, something has shifted in the process of “modernizing” art. The profound, inspiring, and beautiful, became the new, the different, and the ugly.

I support any contemporary progress that involves the expression of the human spirit. But the current state of modern art states otherwise; it points me towards a different kind of interpretation. Nowadays, you look at a painting – say, a single white stripe on a black canvas – and the derivation of meaning is your responsibility. And that’s precisely it: artists have become lazy. 21st-century artworks lack the sophistication and beauty that was so apparent centuries ago. Today, the silly and pointless are held up as the very best of modern art.

Michelangelo carved his David out of a rock. But when I visited the Los Angeles County Museum of Art, I was offered with just a rock. That’s it! All 340 tons of it. That’s how far standards have fallen. 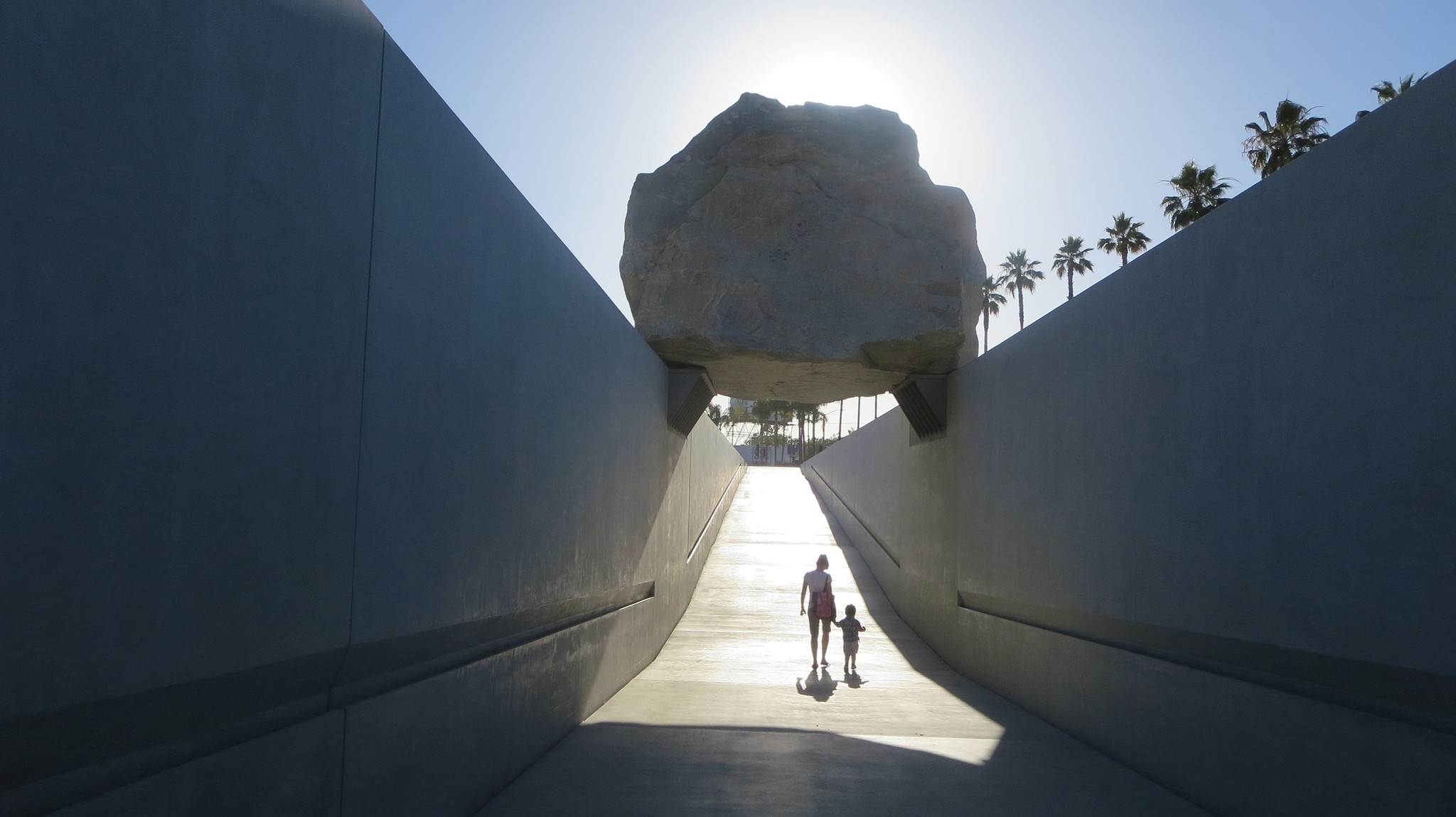 There was once a time when artists applied their incredible abilities to scenes of substance in regards to history, literature, and religion. Nowadays, however, many of the most popular artists merely use their art to make statements often for nothing more than shock value. Artists of the past also made statements, but never at the expense of the artistic virtue and excellence.

The question now becomes, as asked by artist Robert Florczak, “how did the more than a thousand year descent towards artistic perfection and excellence die out?”

Florczak tells a story that, at the beginning of the late 19th century, a group of Impressionists rebelled against the French Academy des Beaux-Arts and its demand for classical standards. Whatever their intentions, the new modernists were planting the seeds of aesthetic relativism.

Today, everybody loves the Impressionists. I certainly do. Above all, as with most revolutions, the first generation produced work of authentic merit. But with each new generation, standards continually decline until the qualities of refinement and experience are gone. I understand that a universal human desire for personal expression motivates all acts of artistic creation. The problem is that all that is left now is the individual expression.

2. How can art be objectively measured?

German art historian Jakob Rosenberg wrote that the quality of art “is not merely a matter of opinion but to a high degree objectively traceable.”

The idea of a universal standard is usually met with opposition. In spite of that, artistic results produced by global standards compared to what is created by aesthetic relativism demonstrates the way that art can be objectively measured. Mainly, without aesthetic standards, we have no way to determine quality.

However, this poses a problem. Blogger Dumb Scientist deepens this concept:

For example, should Rorschach inkblots be classified as art? The first definition would imply that inkblots aren’t art because they’re randomly created as tools for psychoanalysis. However, hang them up on the walls of the Guggenheim, and it would be fairly easy to mistake them as expressions of personal creativity when surrounded by “abstract art.”

If we are to be honest with ourselves, we all know of circumstances where professional expertise is heavily acknowledged. Take gymnastics as an example, where a panel of judges decides each contestant’s excellence. If you were one of the critics, you would undoubtedly flinch if the gymnast willingly and promiscuously lunged his or her body around in ridiculous ways and then demanded that his or her routine be accepted as being worthy of value.

Still, there’s also a biological element to quality. You see, humans are “programmed” by evolution to find patterns in their environment. Because of this adaptation, humans are sometimes prone to seeing patterns where they are not apparent. In art, humans are susceptible to spotting trends in abstract art that they erroneously accredit to personal creativity. Due to the popularity of modern art today, the evaluation of these works neglects the biological truth behind these simple canvasses that roam all around the world, profiting millions. Robert Florzack has a great tale which encapsulates the loss of merit in today’s artistic world:

Here’s a test I give my graduate students, all talented and well educated. Please analyze this Jackson Pollock painting and explain why it is good. It is only after they give very eloquent answers that I inform them that the painting is actually a close up of my studio apron. I don’t blame them; I would probably have done the same since it’s nearly impossible to differentiate between the two.

This deterioration of skill all comes down to the authority figures in the world of art, and most of the blame goes directly to them. Institutions such as museum heads, gallery owners, and art critics all enable the production of this dissipation. Who else would spend ten million dollars on a rock and label it as art?

Art is mostly a creative outlet. That’s why, for instance, a plain chair shouldn’t be considered art, since it’s an object that people sit on. On the flipside, a painting is created to capture an emotion; it isn’t useful in any practical sense, meaning that it can be categorized as art.

Journalist Kevin Mark Rabida initially cited the critical example that contemporary art, along with all other art movements, is contextual. Jackson Pollock wouldn’t probably be as famous if it wasn’t for his background with war. Wenchuan Steel Rebar by Ai Weiwei evidences the importance of context in a more explicit way (see below). 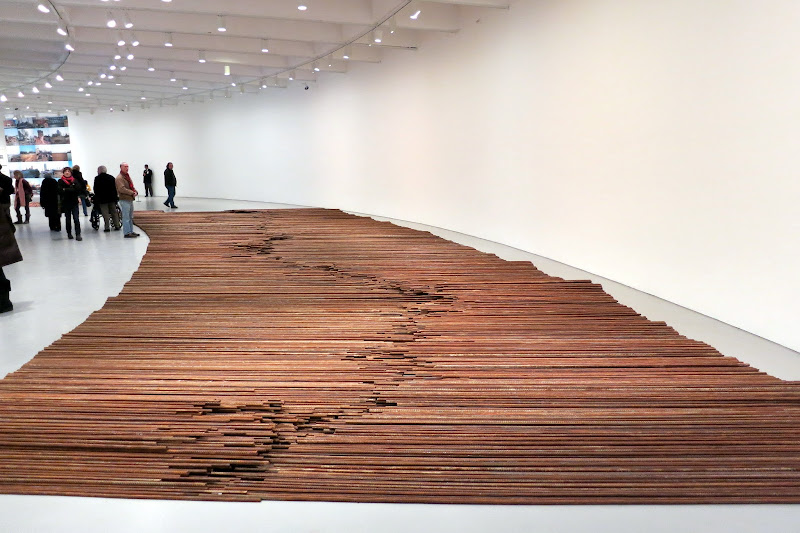 One may think that this work of art is nothing but a bunch of bars stuck together in what appears to be a useless piece of abstract expression.

However, here’s the history of this painting: in 2008, the province of Sichuan in China was hit by an earthquake, killing almost 70,000 people. So Ai Weiwei collected steel rebars from the earthquake site and, as written by Kevin Rabida, “he and his team spent the better part of two years straightening each twisted steel and arranging it in this form to resemble a fissure on the ground.”

When you look at Wenchuan Steel Bar now, doesn’t the meaning change? Doesn’t it feel more significant? The reason for that is that I gave you context.

The value of the work of many – Warhol, Herring, Duchamp, Man Ray, Oldenburg, and countless others – is not merely in the aesthetics, but the ideas. These artists are based on their own concepts. What we have inherited from the continual redefining of the definition of art is a far broader idea of what art is. Is it a thought-provoking statement? Probably. Is it a glass of water? It could be. Is it a plain chair? Sure! Does it have to be pretty? Now that’s a loaded question.

Sometimes art is about the sheer brilliance of turning what was considered a ruined piece of stone into Michelangelo’s David. But sometimes it’s about the pure awesomeness of moving a 340-ton rock through the City of Angels and then dangling it unpredictably overhead.

In a remarkably political world, art can even be about forming opinions about art. So please, shape yours. What do you think about modern art?